Claudia gotten herself a sweet commuter after her boyfriend purchased this Pinarello Montello frameset from his friend.

We are not very sure of the year this Montello is but suspect that it is from the 88' era. It was refurbished and touched up by a local painter here in Singapore and it was nicely done up.

Jan, the purchaser of this lovely frameset wanted to build a commuter for Claudia while wanting to keep the whole build classy. It was a fun job as it was not the usual bike build for us and took us quite sometime to play around with the components before deciding what to pair it up with, while not damaging Jan's pocket!

A sweepback handlebar bar from Velo Orange was secured. Given that Jan is a fan of Brooks, we managed to secured the grips and saddle for his girlfriend. Gumwall tyres is a must for vintage builds and we opted for the rebranded Strada LGG by Donnelly Cycling.

Given that the budget is not high, we opted to go for the IRD Defiant crankset while keeping the front deraileur and rear deraileur the old ultegra to match the whole look.

Thumbies are a brilliant innovation and Velo Orange provided some fantastic thumbies for us to match with Dia Compe downtube shifters! The end result was a really fun commuting bike that is also aesthetically pleasing! 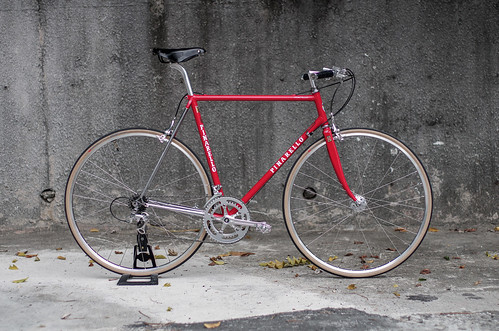