It was a 4 and a half month wait for Firdhaus who had his SuperSix Evo rework on.

It was very exciting for us as our roots were in track bicycles and the 92 Cdale Track was a iconic frameset that many appear to be collecting now.

Having seen a similar build posted up by Radavist where the owner did his SuperSix in the classic 92 Cdale Track blue, we were excited to see if our painter in Taiwan was able to replicate it in the Icelandic green. Thank god that he did not disappoint!

The end result was simply beautiful. How could a paintjob make the whole frame outstanding we wonder. Firdhaus was grinning from one end to one end when he saw his frameset back.

Ditching the original components that came with the bike, he decided to give his beauty a good set up but without breaking the bank. It was a comfortable set up and does not compromise the ride quality that we were really pleased with. 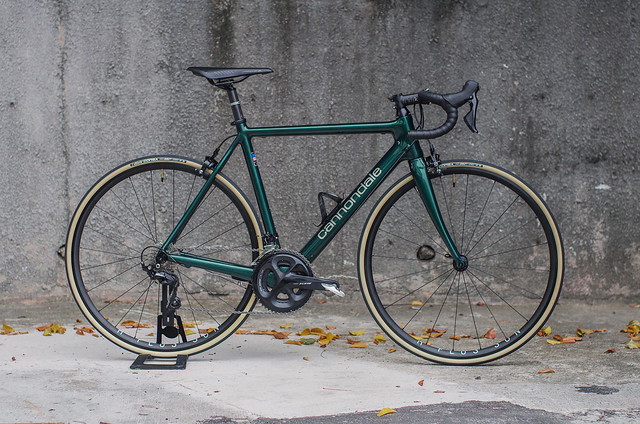 Hi, it is a fantastic job and great color. I have been searching right color for my cannondale supersix hi-mod from year 2016, and I’ve seen more than 300 colors but your work is the best shot for me. I am now in Korea and I am about to hand over to someone to paint on my frame and fork. Could you let me know the color code for your beautiful icelandic green and the one you used for decal on down-tube? I am thinking of glossy and pearly on your icelandic green, so it is great help if you let me know the color code such as “RAL xxxx”.
Please allow to use your colors on frame and decal since I am really inspired from them.
I am thinking