Tony was in the hunt for an alloy frameset after watching his peers switching from carbon to aluminium bikes. Having sold off one of his bikes, he had room to manoeuvre for a new bike without setting off the bomb with his wife.

After a few visits, Tony decided on the 8Bar Kronpinz v2. Something that will not hurt his pocket but yet he can build up something fun. When he heard that we offered restoration and repaint services thanks to our friends in Taiwan, he got hooked on. Something that he was able to customize and make it personal was the deciding factor for him.

Wanted to make it more personal and a little different, Tony went to get the artwork of his popular strava routes and have it on the inner blade of his fork. It was a real challenge as the lines were a little thin and we were worried that it might not be visible. Thickening the outlines too much will look weird and we were glad how it came out together.

The colour of the logos were a little tricky as we want to have it obvious but not too weird with the chameleon blue. Tony handpicked this gold that he spotted on a similar finish frame that was by Cipollini. The colours turned out beautiful.

To finish it off, Tony added a quote on the toptube which shows his belief in his religion. The typefont was nicely chosen and it blend in well with the frame. A symbol of a mountain was also added to the seat tube facing the rear wheel which gives it a nice touch! 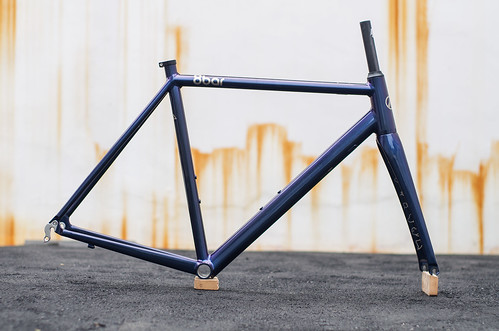