Sherwin wanted to build a comfortable steel road bike for everyday ride as well as an oversea beater bike. An affordable steel road frameset was on his wishlist.

He was immediately excited upon learning that Engine 11 offers a economical steel frameset, built with Columbus Life tubing with a full carbon fork as part of their lineup.

For the price of just 1200sgd, a steel road frameset with no internal routing, the Steeze became the obvious choice. However, it was a long journey for Sherwin.

He did not really fancy the stock colourway as hot pink was never his thing. A repaint job was immediately on his sight and having been a fan of military olive green colourway, his Steeze colourway was decided.

The decals were also being played around with as he decided to omit some of the original decals. View the repainted frameset over here.

The groupset is the next challenge in Sherwin's eyes. He tinkered with the idea of having his groupset to be in all black or have a little olive green as well.

Should Sherwin change his tyres to full black? Hit us up if you think he should! 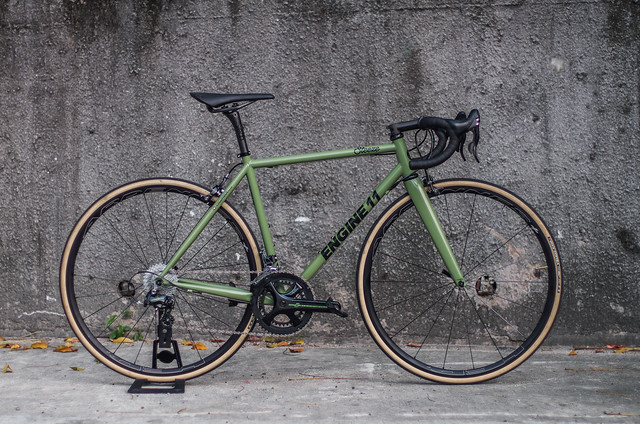